How Fox saved the People 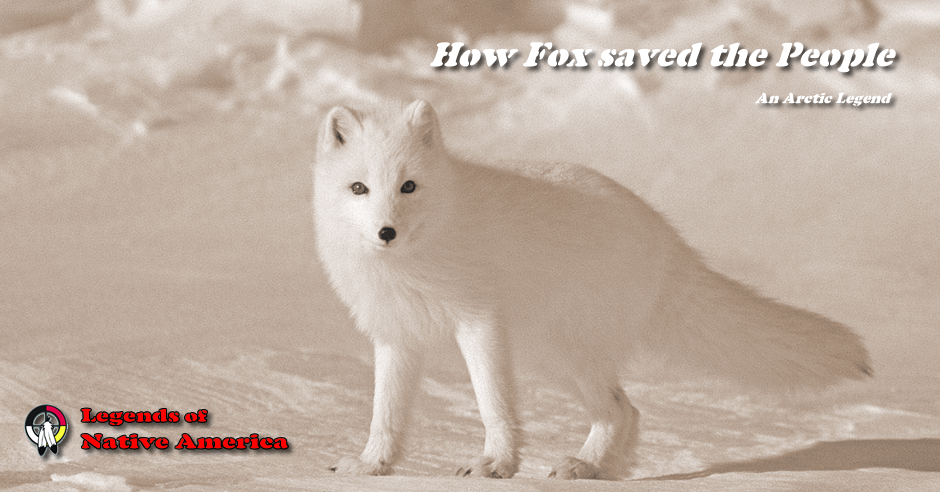 A long time ago in a camp near Great Slave Lake, there were no caribou to kill. For days and days the families went without food. Everyone was very hungry and weak.

Each day a raven landed in the camp. He would wander from tent to tent looking at the hungry people.

Whenever he came to the camp, he appeared cheerful. The people were puzzled why the raven looked so happy.

"Raven, do you have lots of food?", the people asked. "We cannot help noticing your happy face." The raven replied, "I'm having the same problem as you". All this time the raven was thinking about what a good meal he'd have when some of the people died.

The people still wanted to know why the raven always looked so happy. They decided to follow him to see where he went. His footprints led them into the forest. They followed the tracks until suddenly they came to an end. The men looked everywhere for more signs of the raven. Suddenly they noticed a quiver hanging on a branch of a tree. On the quiver were pieces of frozen fat.

"No wonder the raven is so cheerful, he has lots of food. He lied to us. There's probably more food near-by," the people said. They decided there must be a herd of caribou a short distance away.

While the people were talking, a man named Make-Bone said he would follow the raven the next time he left their camp. So everyone returned home, to wait for the raven to appear. The raven visited the camp again the next day, not knowing about the plan the people had decided upon. As usual, he entered each tent looking for a possible meal.

Finally he decided to leave. Already Make-Bone had climbed an old spruce tree to watch the raven. When the raven flew away, Make-Bone tried to follow him with his eyes. However, he was flying out of sight. Since Make-Bone was worried he might lose the raven, he wiped his forehead with ashes. This helped him to see better.

"I can see him now," cried Make-Bone. "He's landing near a hill. Let's follow him there!" Everyone started walking through the forest to find the raven. It was a long walk and everyone became very tired. Finally they arrived at the hill where Make-Bone had last seen the raven.. At first they didn't see any sign of the bird. Then suddenly they noticed a big spruce hut nearby. Quickly the people surrounded the lodging. A wolf, who happened to appear then, offered to enter the hut to see what was inside.

In there he noticed a bundle of food on a pole rack, which was over a fire. The wolf grasped the heavy bundle and took it to the people. Everyone was happy to have food to eat. However, they decided to find the raven, so that they would have food for the next meal as well.

"Who will enter the hut to spy on the raven?" the crowd asked. This time a fox offered to help. Before he went in, he told the people to put all the children on a pole rack, where they would be safe. Then the fox told everyone to stand nearby. "Be ready to start spearing," he said. When the people were ready, the fox entered the hut.

Once inside, he brushed the fire with his bushy tail. This made large clouds of smoke. Quickly he trotted outside with a trail of smoke following him. Everyone waited patiently.

Soon there was a loud noise which sounded like thunder. Suddenly a large herd of caribou stampeded from the spruce hut. The hunters began spearing the caribou as they ran past. When most of the caribou had been killed, the people noticed a pair of crumbled wings and bits of feather on the ground. An old women started to sob when she saw this.

"Where is the raven? We need the wise raven!" she cried. Then she picked up the pieces of bone and feather and put them beside her when she went to sleep that night. The next morning she found that the raven was not dead.

The raven felt sorry that he had saved the caribou. He knew that the fox had outwitted him, and had saved the people from starving.