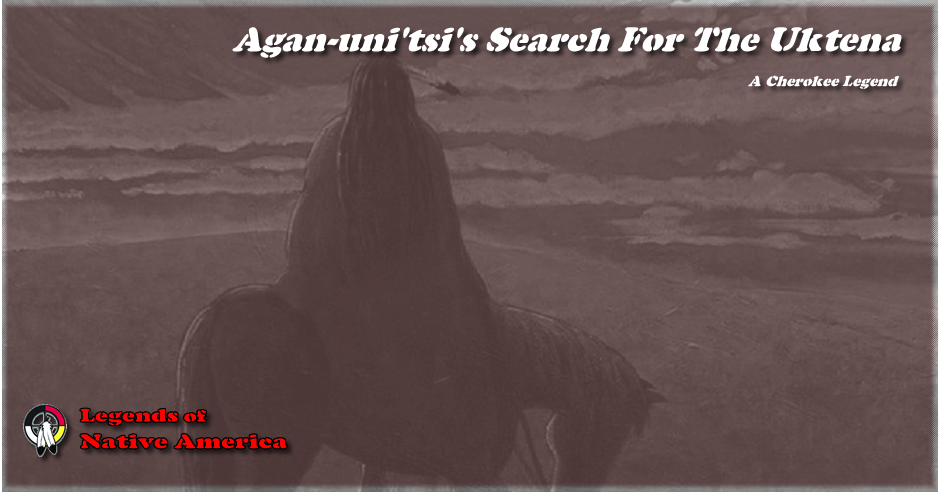 In one of their battles with the Shawano, who are all magicians, the Cherokee captured a great medicine-man whose name was Âgän-uni'tsï, "The Ground-hogs' Mother." They had tied him ready for the torture when he begged for his life and engaged, if spared, to find for them the great wonder worker, the Ulûñsû'tî.

Now, the Ulûñsû'tî is like a blazing star set in the forehead of the great Uktena serpent, and the medicine-man who could possess it might do marvelous things, but everyone knew this could not be, because it was certain death to meet the Uktena. They warned him of all this but he only answered that his medicine was strong and he was not afraid. So they gave him his life on that condition and he began the search.

The Uktena used to lie in wait in lonely places to surprise its victims, and especially haunted the dark passes of the Great Smoky mountains. Knowing this, the magician went first to a gap in the range on the far northern border of the Cherokee country. He searched and found there a monster blacksnake, larger than had ever been known before, but it was not what he was looking for, and he laughed at it as something too small for notice.

Coming on to U'täwagûn'ta, the Bald mountain, he found there a great diya'hälï (lizard) basking, but, although it was large and terrible to look at, it was not what he wanted and he paid no attention to it. Going still south to Walâsi'yï, the Frog place, he found a great frog squatting in the gap, but when the people who came to see it were frightened like the others and ran away from the monster he mocked at them for being afraid of a frog and went on to the next gap.

He went on to Duniskwa`lgûñ'yï, the Gap of the Forked Antler, and to the enchanted lake of Atagâ'hï, and at each he found monstrous reptiles, but he said they were nothing. He thought the Uktena might be hiding in the deep water at Tlanusi'yï, the Leech place, on Hiwassee, where other strange things had been seen before, and going there he dived far down under the surface.

He saw turtles and water snakes, and two immense sun-perches rushed at him and retreated again, but that was all. Other places he tried, going always southward, and at last on Gahû'tï mountain he found the Uktena asleep.

Turning without noise, he ran swiftly down the mountain side as far as he could go with one long breath, nearly to the bottom of the slope. There he stopped and piled up a great circle of pine cones, and inside of it he dug a deep trench. Then he set fire to the cones and came back again up the, mountain.

The Uktena was still asleep, and, putting an arrow to his bow, Âgän-uni'tsï shot and sent the arrow through its heart, which was under the seventh spot from the serpent's head. The great snake raised his head, with the diamond in front flashing fire, and came straight at his enemy, but the magician, turning quickly, ran at full speed down the mountain, cleared the circle of fire and the trench at one bound, and lay down on the ground inside.

The Uktena tried to follow, but the arrow was through his heart. and in another moment he rolled over in his death struggle, spitting poison over all the mountain side. But the poison drops could not pass the circle of fire, but only hissed and sputtered in the blaze, and the magician on the inside was untouched except by one small drop which struck upon his head as he lay close to the ground; but he did not know it.

The blood, too, as poisonous as the froth, poured from the Uktena's wound and down the slope in a dark stream, but it ran into the trench and left him 'Unharmed. The dying monster rolled over and over down the mountain, breaking down large trees in its path until it reached the bottom. Then Âgän-uni'tsï called every bird in all the woods to come to the feast, and so many came that when they were done not even the bones were left. After seven days he went by night to the spot. The body and the bones of the snake were gone, all eaten by the birds, but he saw a bright light shining in the darkness, and going over to it he found, resting on a low-hanging branch, where a raven had dropped it, the diamond from the head of the Uktena.

He wrapped it up carefully and took it with him, and from that time he became the greatest medicine-man in the whole tribe. When Âgän-uni'tsï came down again to the settlement the people noticed a small snake hanging from his head where the single drop of poison from the Uktena had struck; but so long as he lived he himself never knew that it was there.

Where the blood of the Uktena had filled the trench a lake formed afterwards, and the water was black and in this water the women used to dye the cane splits for their baskets.