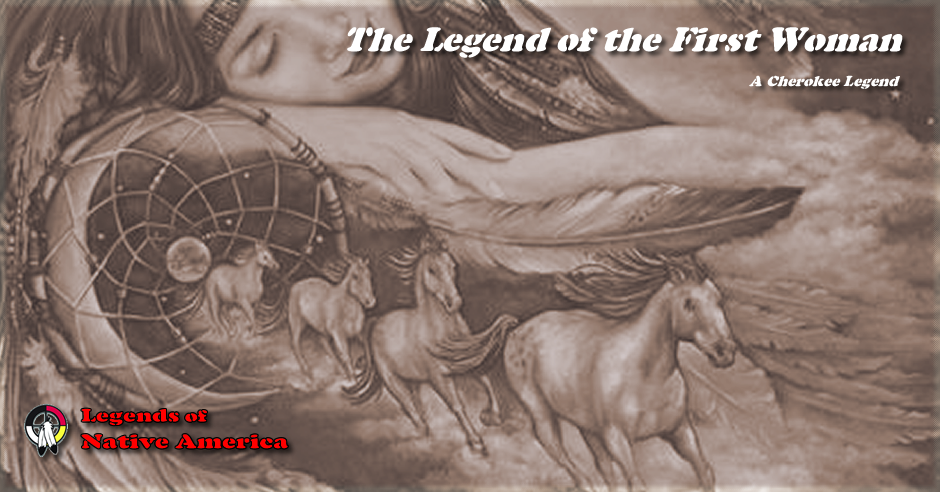 For a time the man was very happy on the Earth. He roamed around and ate the fruits and berries and he visited the animals and he saw all his homeland. There was much to learn and the Earth was beautiful. But before long the man grew discontented and he became very unhappy. He didn't know what this disease was, but it was a disease we still have, he was bored.

When he got bored, he used his mind and strength differently. He shot arrows at the deer without really needing to. He picked the plants and didn't use them. He tore up the animal's dens just to see if he could do it. And soon the animals became concerned about the new creature.

The animals called a council meeting to try to determine what to do. They said they thought this creature was supposed to have respect for other creatures, that he was given a mind. A little insect said, "Wait, you haven't thought this out. The Great One made him; let's ask him what to do." This seemed to be a good idea. They called to the Great One to help them with the new "superior" creature.

The owl said, "You told us the man had a mind and he is to respect us." The deer said, " I don't want to be disrespectful, but you told us the man would need more of us deer than any other animal. If he keeps killing us like he is now, very soon there won't be any deer left."

"Oh," said the Great One, "thank you, thank you. I had not thought about something I left out in this man."

The bear said, "Look at him right now. He's lying out in the sun with his face up. No animal will sleep right out in the open. We all know to go into a private, guarded place to rest."

The Great One said, "Yes, there is something missing because I was in such an excited hurry to make him. But I know now what is missing."

"Stand back" he said. He made a green plant to grow up tall. The plant grew up right over the man's heart, up toward Galunti. It was a plant with long, graceful leaves and then an ear and a golden tassel. Above the tall plant was a woman, a beautiful, tall, brown woman growing from the stalk of corn.

The man woke up and thought he was dreaming. He rubbed his eyes and said, "This is not true. In a minute, I'll wake up and be just as bored as I was before. Oh, I am so lonely."

The Great One sort of kicked him in the behind. "Get up you lazy thing," the Great One said. "Be a man for your lady." Now no one had any reason to think this man was a mannerly individual. Recently he had certainly not been acting like a real gentleman. But we don't have to be taught manners. We need someone to expect the best from us and we use the manners the Great One has already given us. So the man got up and brushed himself off and gallantly offered his hand to the woman who came down from the stalk of corn.

The woman said, "No, wait a minute." The man didn't argue or huff. He just waited until she asked. She reached up and pulled two good ears of corn to take with her. Then she said, "I'm ready." Do you know why she wanted the corn? She couldn't have known yet that the corn would be an important food. She just knew that she had sprung from the corn and she needed to take something of her heritage with her.

The Great One remembered that although each man will sometimes need to be alone, each man will also need companionship to be his best.

Over a period of time, the man and the woman built a home where they kept the corn for planting. The next spring she planted her corn and it grew into a beautiful plant. It was probably the next year that she noticed a large bird who became sacred to the Cherokee, a large bird who stays usually on the ground. We call this bird a turkey. The turkey became sacred to the Cherokee because they could watch what he ate, and then they would know it was safe to eat.

One morning the woman noticed the turkey eating the tender corn. She knew then the corn was food and it was time to eat the corn. That evening she set a pottery pot of corn in the middle of her cook fire. She covered the pot with a curve of chestnut bark. When the man came in to eat his fish stew, she didn't tell him what she had cooked. She just pulled an ear of corn from the pot and pealed it back so he could smell it. He thought it was the best aroma he had ever smelled and he began to eat the first corn of the spring.