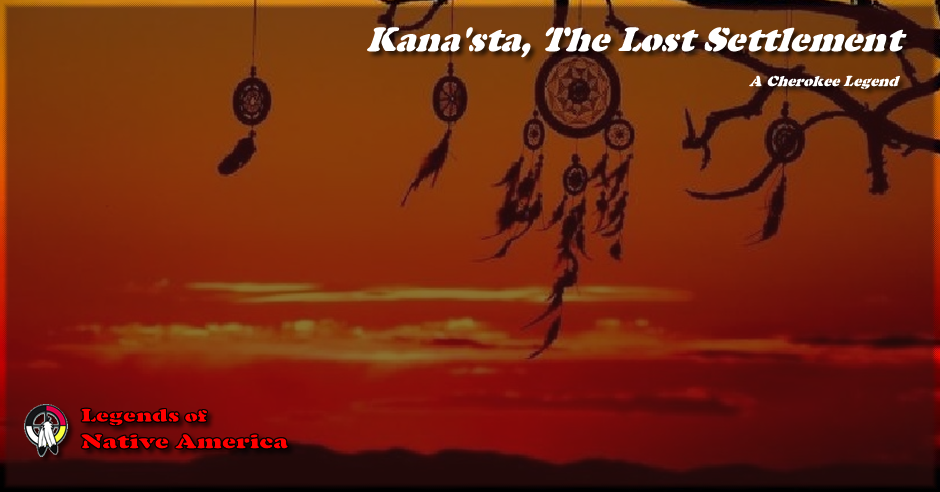 Long ago, while people still lived in the old town of Kana'sta, on the French Broad, two strangers, who looked in no way different from other Cherokee, came into the settlement one day and made their way into the chief's house.

After the first greetings were over the chief asked them from what town they had come, thinking them from one of the western settlements, but they said, "We are of your people and our town is close at hand, but you have never seen it. Here you have wars and sickness, with enemies on every side, and after a while a stronger enemy will come to take your country from you, We are always happy, and we have come to invite you to live with us in our town over there," and they pointed toward Tsuwa`tel'da (Pilot knob). "We do not live forever, and do not always find game when we go for it, for the game belongs to Tsul`kälû', who lives in Tsunegûñ'yï, but we have peace always and need not think of danger. We go now, but if your people will live with us let them fast seven days, and we shall come then to take them." Then they went away toward the west.

They fasted six days, and on the morning of the seventh, before yet the sun was high, they saw a great company coming along the trail from the west, led by the two men who had stopped with the chief.

They seemed just like Cherokee from another settlement, and after a friendly meeting they took up a part of the goods to be carried, and the two parties started back together for Tsuwa`tel'da.

There was one man from another town visiting at Kana'sta, and he went along with the rest. When they came to the mountain, the two guides led the way into a cave, which opened out like a great door in the side of the rock. Inside they found an open country and a town, with houses ranged in two long rows from east to west.

The mountain people lived in the houses on the south side, and they had made ready the other houses for the new comers, but even after all the people of Kana'sta, with their children and belongings, had moved in, there were still a large number of houses waiting ready for the next who might come.

The mountain people told them that there was another town, of a different people, above them in the same mountain, and still farther above, at the very top, lived the Ani'- Hyûñ'tïkwälâ'skï (the Thunders).

Now all the people of Kana'sta were settled in their new homes, but the man who had only been visiting with them wanted to go back to his own friends. Some of the mountain people wanted to prevent this, but the chief said, "No; let him go if he will, and when he tells his friends they may want to come, too. There is plenty of room for all."

Then he said to the man, "Go back and tell your friends that if they want to come and live with us and be always happy, there is a place here ready and waiting for them. Others of us live in Datsu'nalâsgûñ'yï and in the high mountains all around, and if they would rather go to any of them it is all the same. We see you wherever you go and are with you in all your dances, but you can not see us unless you fast. If you want to see us, fast four days, and we will come and talk with you; and then if you want to live with us, fast again seven days, and we will come and take you."

Then the chief led the man through the cave to the outside of the mountain and left him there, but when the man looked back he saw no cave, but only the solid rock.

The people of the lost settlement were never seen again, and they are still living in Tsuwa`tel'da. Strange things happen there, so that the Cherokee know the mountain is haunted and do not like to go near it. Only a few years ago a party of hunters camped there, and as they sat around their fire at supper time they talked of the story and made rough jokes about the people of old Kana'sta.

That night they were aroused from sleep by a noise as of stones thrown at them from among the trees, but when they searched they could find nobody, and were so frightened that they gathered up their guns and pouches and left the place.