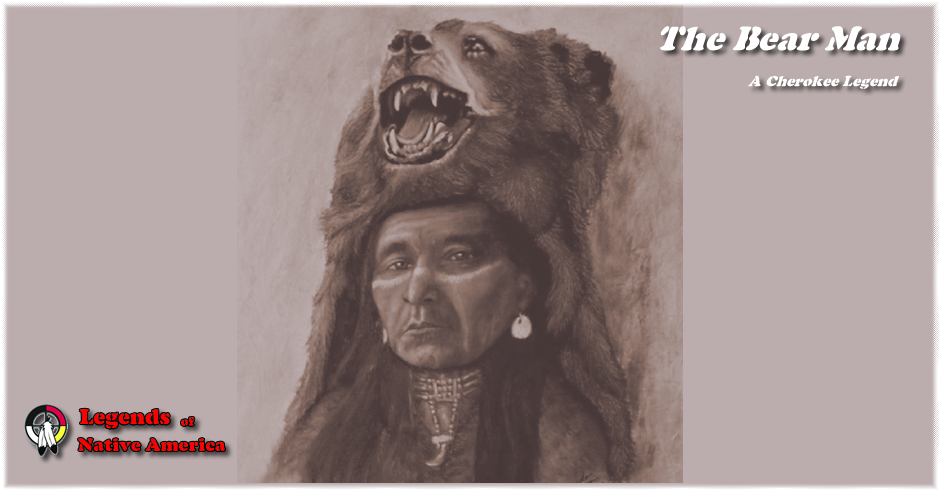 A man went hunting in the mountains and came across a black bear, which he wounded with an arrow. The bear turned and started to run the other way, and the hunter followed, shooting one arrow after another into it without bringing it down.

Now, this was a medicine bear, and could talk or read the thoughts of people without their saying a word. At last he stopped and pulled the arrows out of his side and gave them to the man, saying, "It is of no use for you to shoot at me, for you can not kill me. Come to my house and let us live together."

The hunter thought to himself, "He may kill me;" but the bear read his thoughts and said, "No, I won't hurt you."

The man thought again, "How can I get anything to eat?" but the bear knew his thoughts, and said, "There shall be plenty." So the hunter went with the bear.

It was full of bears--old bears, young bears, and cubs, white bears, black bears, and brown bears--and a large white bear was the chief. They sat down in a corner, but soon the bears scented the hunter and began to ask, "What is it that smells bad?"

The chief said, "Don't talk so; it is only a stranger come to see us. Let him alone."

Food was getting scarce in the mountains, and the council was to decide what to do about it. They had Sent out messengers all over, and while they were talking two bears came in and reported that they had found a country in the low grounds where there, were so many chestnuts and acorns that mast was knee deep.

Then they were all pleased, and got ready for a dance, and the dance leader was the one the Indians call Kalâs'-gûnähi'ta, "Long Hams," a great black bear that is always lean.

After the dance the bears noticed the hunter's bow and arrows, and one said, "This is what men use to kill us. Let us see if we can manage them, and maybe we can fight man with his own weapons." So they took the bow and arrows from the hunter to try them. They fitted the arrow and drew back the string, but when they let go it caught in their long claws and the arrows dropped to the ground.

They saw that they could not use the bow and arrows and gave them back to the man. When the dance and the council were over, they began to go home, excepting the White Bear chief, who lived there, and at last the hunter and the bear went out together.

They went on until they came to another hole in the side of the mountain, when the bear said, "This is where I live," and they went in. By this time the hunter was very hungry and was wondering how he could get something to eat. The other knew his thoughts, and sitting up on his hind legs he rubbed his stomach with his forepaws--so--and at once he had both paws full of chestnuts and gave them to the man.

The hunter lived in the cave with the bear all winter, until long hair like that of a bear began to grow all over his body and he began to act like a bear; but he still walked like a man. One day in early spring the bear said to him, "Your people down in the settlement are getting ready for a grand hunt in these mountains, and they will come to this cave and kill me and take these clothes from me"--he meant his skin--" but they will not hurt you and will take you home with them." The bear knew what the people were doing down in the settlement just as he always knew what the man was thinking about.

Some days passed and the bear said again, "This is the day when the Topknots will come to kill me, but the Split-noses will come first and find us. When they have killed me they will drag me outside the cave and take off my clothes and cut me in pieces. You must cover the blood with leaves, and when they are taking you away look back after you have gone a piece and you will see something."

Soon they heard the hunters coming up the mountain, and then the .dogs found the cave and began to bark. The hunters came and looked inside and saw the bear and killed him with their arrows. Then they dragged him outside the cave and skinned the body and cut it in quarters to carry home. The dogs kept on barking until the hunters thought there must be another bear in the cave.

They looked in again and saw the man away at the farther end. At first they thought it was another bear on account of his long hair, but they soon saw it was the hunter who had been lost the year before, so they went in and brought him out. Then each hunter took a load of the bear meat and they started home again, bringing the man and the skin with them.

Before they left the man piled leaves over the spot where they had cut up the bear, and when they had gone a little way he looked behind and saw the bear rise up out of the leaves, shake himself, and go back into the woods.

When they came near the settlement the man told the hunters that he must be shut up where no one could see him, without anything to eat or drink for seven days and nights, until the bear nature had left him and he became like a man again.

So they shut him up alone in a house and tried to keep very still about it, but the news got out and his wife heard of it. She came for her husband, but the people would not let her near him; but she came every day and begged so hard that at last after four or five days they let her have him. She took him home with her, but in a short time he died, because he still had a bear's nature and could not live like a man.

If they had kept him shut up and fasting until the end of the seven days he would have become a man again and would have lived.

The Bear Man
A Cherokee Legend
Myths of the Cherokee, James Mooney, 1900