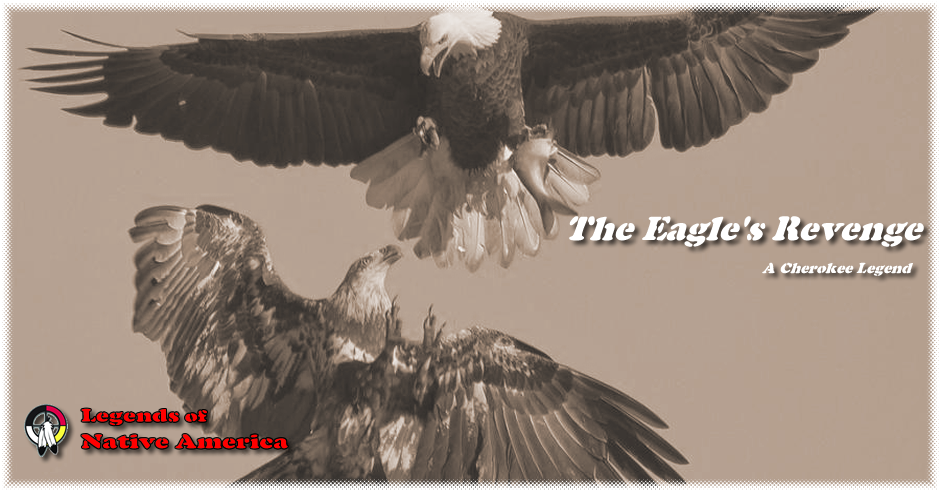 Once a hunter in the mountains heard a noise at night like a rushing wind outside the cabin, and on going out he found that an eagle had just alighted on the drying pole and was tearing at the body of a deer hanging there.

Without thinking of the danger, he shot the eagle. In the morning he took the deer and started back to the settlement, where he told what he had done, and the chief sent out some men to bring in the eagle and arrange for an Eagle dance. They brought back the dead eagle, everything was made ready, and that night they started the dance in the townhouse.

About midnight there was a whoop outside and a strange warrior came into the circle and began to recite his exploits. No one knew him, but they thought he had come from one of the farther Cherokee towns.

He told how he had killed a man, and at the end of the story he gave a hoarse yell, Hi! that startled the whole company, and one of the seven men with the rattles fell over dead. He sang of another deed, and at the end straightened up with another loud yell. A second rattler fell dead, and the people were so full of fear that they could not stir from their places.

Still he kept on, and at every pause there came again that terrible scream, until the last of the seven rattlers fell dead, and then the stranger went out into the darkness. Long afterward they learned from the eagle killer that it was the brother of the eagle shot by the hunter.