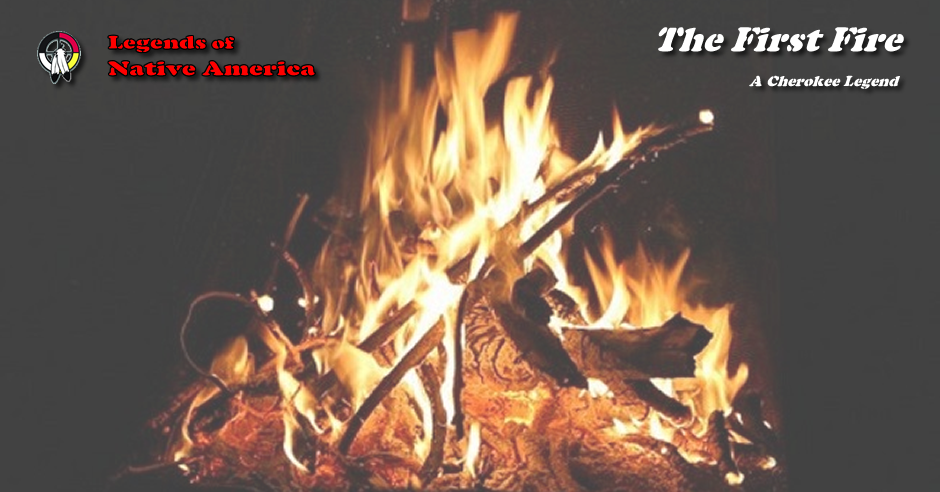 In the beginning of the world, there was no fire. The animal people were often cold. Only the Thunders, who lived in the world beyond the sky arch, had fire. At last they sent Lightning down to an island. Lightning put fire into the bottom of a hollow sycamore tree.

The animal people knew that the fire was there, because they could see smoke rising from the top of the tree. But they could not get to it on account of the water. So they held a council to decide what to do.

Everyone that could fly or could swim was eager to go after the fire. Raven said, "Let me go. I am large and strong."

At that time Raven was white. He flew high and far across the water and reached the top of the sycamore tree. While he sat there wondering what to do, the heat scorched all his feathers black. The frightened Raven flew home without the fire, and his feathers have been black ever since.

Then the council sent Screech Owl. He flew to the island. But while he was looking down into the hollow tree, a blast of hot air came up and nearly burned out his eyes. He flew home and to this day, Screech Owl's eyes are red.

Then Hooting Owl and Horned Owl were sent to the island together. But the smoke nearly blinded them, and the ashes carried up by the wind made white rings about their eyes. They had to come home, and were never able to get rid of the white rings.

Then Little Snake swam across to the island, crawled through the grass to the tree, and entered it through a small hole at the bottom. But the smoke and the heat were too much for him, too. He escaped alive, but his body had been scorched black. And it was so twisted that he doubled on his track as if always trying to escape from a small space.

Big Snake, the climber, offered to go for fire, but he fell into the burning stump and became as black as Little Snake. He has been the great blacksnake ever since.

At last Water Spider said that she would go. Water Spider has black downy hair and red stripes on her body. She could run on top of water and she could dive to the bottom. She would have no trouble in getting to the island.

"But you are so little, how will you carry enough fire?" the council asked.

"I'll manage all right," answered Water Spider. "I can spin a web." so she spun a thread from her body and wove it into a little bowl and fastened the little bowl on her back. Then she crossed over to the island and through the grass. She put one little coal of fire into her bowl and brought it across to the people.

Every since, we have had fire. And the Water Spider still has her little bowl on her back.