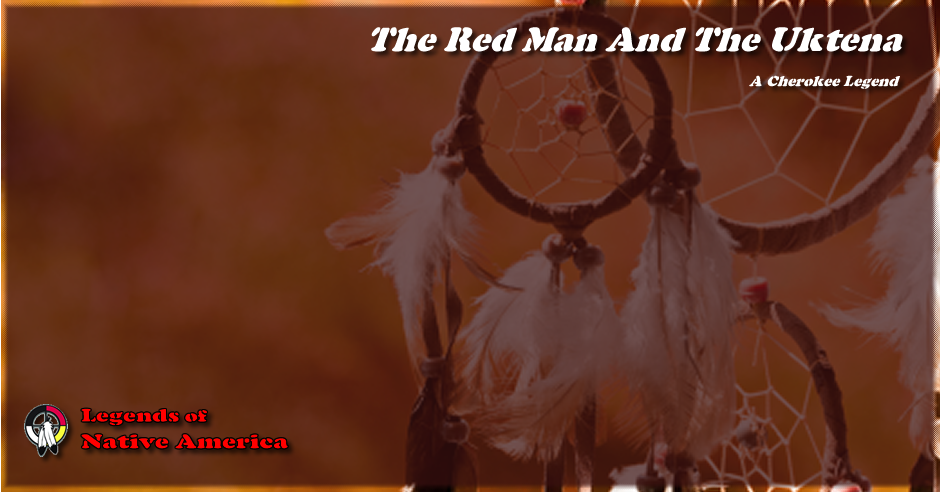 Two brothers went bunting together, and when they came to a good camping place in the mountains they made a fire, and while one gathered bark to put up a shelter the other started up the creek to look for a deer.

Soon he heard a noise on the top of the ridge as if two animals were fighting. He hurried through the bushes to see what it might be, and when he came to the spot he found a great uktena coiled around a man and choking him to death.

The man was fighting for his life, and called out to the hunter: "Help me, nephew; he is your enemy as well as mine." The hunter took good aim, and, drawing the arrow to the head, sent it through the body of the uktena, so that the blood spouted from the hole. The snake loosed its coils with a snapping noise, and went tumbling down the ridge into the valley, tearing up the earth like a water spout as it rolled.

The stranger stood up, and it was the Asga'ya Gi'gägeï, the Red Man of the Lightning. He said to the hunter: "You have helped me, and now I will reward you, and give you a medicine so that you can always find game." They waited until it was dark, and then went down the ridge to where the dead uktena had rolled, but by this time the birds and insects had eaten the body and only the bones were left.

In one place were flashes of light coming up from the ground, and on digging here, just under the surface, the Red Man found a scale of the uktena. Next he went over to a tree that had been struck by lightning, and gathering a handful of splinters he made a fire and burned the uktena scale to a coal.

He wrapped this in a piece of deerskin and gave it to the hunter, saying: "As long as you keep this you can always kill game." Then he told the hunter that when he went back to camp he must hang up the medicine on a tree outside, because it was very strong and dangerous. He told him also that when he went into the cabin he would find his brother lying inside nearly dead on account of the presence of the uktena's scale, but he must take a small piece of cane, which the Red Man gave him, and scrape a little of it into water and give it to his brother to drink and he would be well again.

Then the Red Man was gone, and the hunter could not see where he went. He returned to camp alone, and found his brother very sick, but soon cured him with the medicine from the cane, and that, day and the next, and every day after, he found game whenever he went for it.