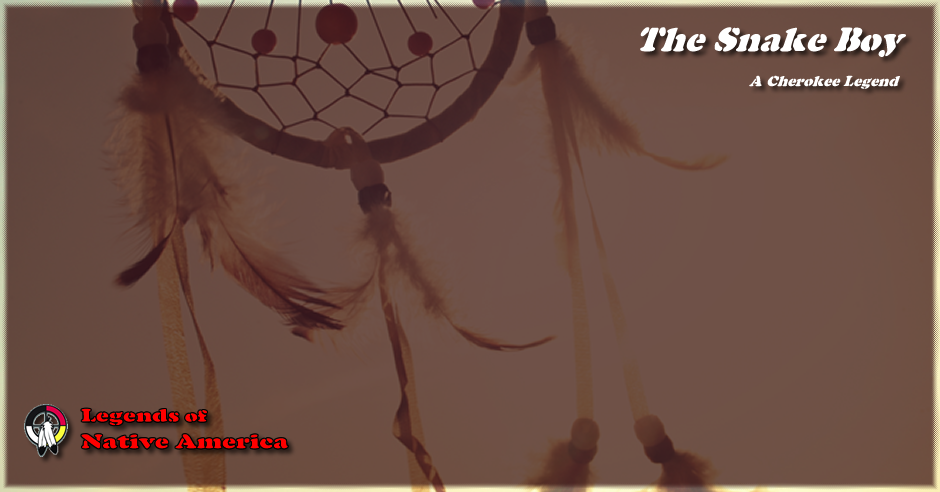 There was a boy who used to go bird hunting every day, and all the birds he brought home he gave to his grandmother, who was very fond of him.

This made the rest of the family jealous, and they treated him in such fashion that at last one day he told his grandmother he would leave them all, but that she must not grieve for him. Next morning he refused to eat any breakfast, but went off hungry to the woods and was gone all day. In the evening he returned, bringing with him a pair of deer horns, and went directly to the hothouse (âsï), where his grandmother was waiting for him. He told the old woman he must be alone that night, so she got up and went into the house where the others were.

At early daybreak she came again to the hothouse and looked in, and there she saw an immense uktena that filled the âsï, with horns on its head, but still with two human legs instead of a snake tail. It was all that was left of her boy. He spoke to her and told her to leave him, and she went away again from the door.

When the sun was well up, the uktena began slowly to crawl out, but it was full noon before it was all out of the âsï. It made a terrible hissing noise as it came out, and all the people ran from it. It crawled on through the settlement, leaving a broad trail in the ground behind it, until it came to a deep bend in the river, where it plunged in and went under the water.

The grandmother grieved much for her boy, until the others of the family got angry and told her that as she thought so much of him she ought to go and stay with him. So she left them and went along the trail made by the uktena to the river and walked directly into the water and disappeared.

Once after that a man fishing near the place saw her sitting on a large rock in the river, looking just as she had always looked, but as soon as she caught sight of him she jumped into the water and was gone.