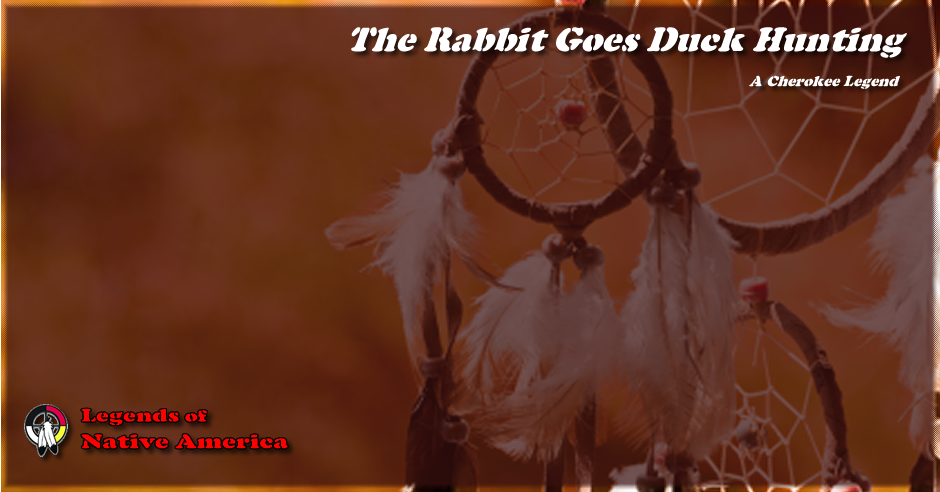 The Rabbit was so boastful that he would claim to do whatever he saw anyone else do, and so tricky that he could usually make the other animals believe it all.

Once he pretended that he could swim in the water and eat fish just as the Otter did, and when the others told him to prove it he fixed up a plan so that the Otter himself was deceived.

Soon afterward they met again and the Otter said, "I eat ducks sometimes." Said the Rabbit, "Well, I eat ducks too."

The Otter challenged him to try it; so they went up along the river until they saw several ducks in the water and managed to get near without being seen. The Rabbit told the Otter to go first.

The Otter never hesitated, but dived from the bank and swam under water until he reached the ducks, when he pulled one down without being noticed by the others, and came back in the same way.

While the Otter had been under the water the Rabbit had peeled some bark from a sapling and made himself a noose. "

Now," he said, "Just watch me;" and he dived in and swam a little way under the water until he was nearly choking and had to come up to the top to breathe. He went under again and came up again a little nearer to the ducks. He took another breath and dived under, and this time he came up among the ducks and threw the noose over the head of one and caught it.

The duck struggled hard and finally spread its wings and flew up from the water with the Rabbit hanging on to the noose.

It flew on and on until at last the Rabbit could not hold on any longer, but had to let go and drop. As it happened, he fell into a tall, hollow sycamore stump without any hole at the bottom to get out from, and there he stayed until he was so hungry that he had to eat his own fur, as the rabbit does ever since when he is starving.

After several days, when he was very weak with hunger, he heard children playing outside around the trees.

He began to sing: Cut a door and look at me;

I'm the prettiest thing you ever did see.

The children ran home and told their father, who came and began to cut a hole in the tree.

As he chopped away the Rabbit inside kept singing, "Cut it larger, so you can see me better; I'm so pretty."

They made the hole larger, and then the Rabbit told them to stand back so that they could take a good look as he came out. They stood away back, and the Rabbit watched for his chance and jumped out and got away.