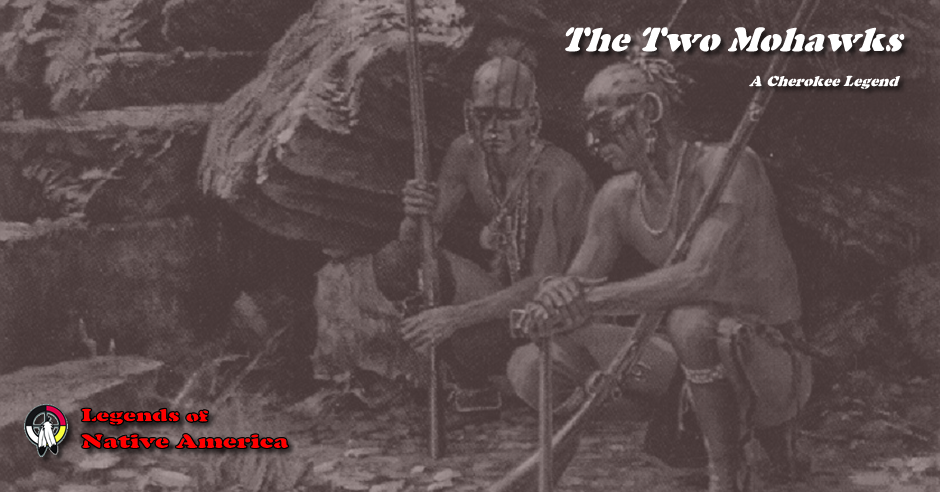 In the year 1747 a couple of the Mohawk Indians came against the lower towns of the Cheerake, and cunningly ambuscaded them through most part of the spring and summer.

The two killed above twenty in different attacks before they were discovered by any party of the enraged and dejected people.

They had a thorough knowledge of the most convenient ground for their purpose, and were extremely swift and long-winded. Whenever they killed any and got the scalp they made off to the neighboring mountains, and ran over the broad ledges of rocks in contrary courses, as occasion offered, so as the pursuers could by no means trace them.

Once, when a large company was in chase of them, they ran round a steep hill at the head of the main eastern branch of Savana river, intercepted, killed, and scalped the hindmost of the party, and then made off between them and Keeowhee.

As this was the town to which the company belonged, they hastened home in a close body, as the proper place of security from such enemy wizards. In this manner did those two sprightly, gallant savages perplex and intimidate their foes for the space of four moons in the greatest security, though they often were forced to kill and barbecue what they chiefly lived upon, in the midst of their watchful enemies.

Having sufficiently revenged their relations' blood and gratified their own ambition with an uncommon number of scalps, they resolved to captivate one and run home with him as a proof of their having killed none but the enemies of their country. Advancing with the usual caution on such an occasion, one crawled along under the best cover of the place about the distance of a hundred yards ahead, while the other shifted from tree to tree, looking sharply every way.

In the evening, however, an old, beloved man discovered them from the top of an adjoining hill, and knew them to be enemies by the cut of their hair, light trim for running, and their, postures.

He returned to the town and called first at the house of one of our traders and informed him of the affair, enjoining him not to mention it to any, lest the people should set off against them without success before their tracks were to be discovered and he be charged with having deceived them.

But, contrary to the true policy of traders among unforgiving savages, that thoughtless member of the Choktah Sphinx Company busied himself, as usual, out of his proper sphere, sent for the headmen, and told them the story. As the Mohawks were allies and not known to molest any of the traders in the paths and woods, he ought to have observed a strict neutrality.

The youth of the town, by order of their headmen, carried on their noisy public diversions in their usual manner to prevent their foes from having any suspicion of their danger, while runners were sent from the town to their neighbors to come silently and assist them to secure the prey in its state of security.

They came like silent ghosts, concerted their plan of operation, passed over the river at the old trading ford opposite to the late fort, which lay between two contiguous commanding hills, and, proceeding downward over a broad creek, formed a large semicircle from the river bank, while the town seemed to be taking its usual rest. They then closed into a narrower compass, and at last discovered the two brave, unfortunate men lying close under the tops of some fallen young pine trees. The company gave the war signal, and the Mohawks, bounding up, bravely repeated it; but, by their sudden spring from under thick cover, their arms were useless. They made desperate efforts, however, to kill or be killed, as their situation required.

One of the Cherokee, the noted half-breed of Istanare [Ustäna'lï] town, which lay 2 miles from thence, was at the first onset knocked down and almost killed with his own cutlass, which was wrested from him, though he was the strongest of the whole nation. But they were overpowered by numbers, captivated, and put to the most exquisite tortures of fire, amidst a prodigious crowd of exulting foes.

One of the present Choktah traders, who was on the spot, told me that when they were tied to the stake the younger of the two discovered our traders on a hill near, addressed them in English, and entreated them to redeem their lives. The elder immediately spoke to him, in his own language, to desist. On this, he recollected himself, and became composed like a stoic, manifesting an indifference to life or death, pleasure or pain, according to their standard of martial virtue, and their dying behavior did not reflect the least dishonor on their former gallant actions.

All the pangs of fiery torture served only to refine their manly spirits, and as it was out of the power of the traders to redeem them they, according to our usual custom, retired as soon as the Indians began the diabolical tragedy.