Why the Opussum's Tail Is Bare 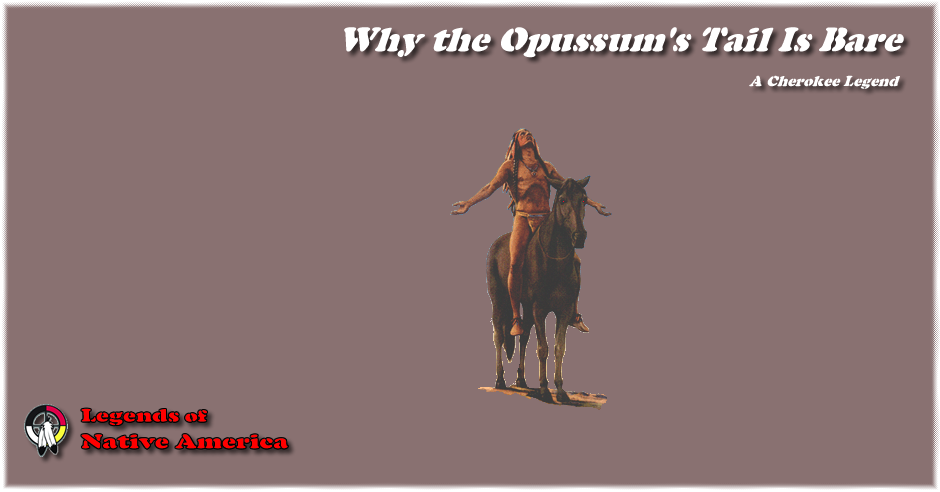 In the beginning all living things - men, animals, plants and trees - spoke the same language and behaved in much the same way. Animals, like people, were organized into tribes. They had chiefs, lived in houses, held councils and ceremonies.

Many animals had characteristics which we would not recognize today. The rabbit, for example, was fierce, bold and cunning, and a great mischief maker. It was through Rabbit's tricks that the deer lost his sharp wolf-like teeth, the buzzard his handsome topknot of feathers and the opossum his long, bushy tail.

Opossum was very proud of his tail which, in those days, was covered with thick black fur. He spent long hours cleaning and brushing it and composing songs about its beauty and vigour. Sometimes, when he walked through the village, he carried his tail erect, like a banner rippling in the breeze. At other times, he swept it low behind him, like a train. It was useful as well as beautiful, for when Opossum lay down to sleep, he tucked it under him to make a soft bed, and in cold weather he folded it over his body to keep himself warm.

Rabbit was very jealous of Opossum's tail. He, too, had once had a long bushy tail but, during the course of a a fight with Bear, he had lost most of it and now had only a short fluffy tuft. The sight of Opossum strutting before the other animals and swirling his tail ostentatiously, filled Rabbit with rage and he made up his mind to play a trick on him at the first opportunity.

At this time, when the animals still lived harmoniously together, each had his appointed station and duty. Thus, Frog was leader in the council and Rabbit, because of his speed, was employed to carry messages and announcements to the others.

As was their custom from time to time, the animals decided to hold a great council to discuss important matters and Rabbit, as usual, was given the task of arranging the gathering and delivering the invitations. Councils were also occasions for feasting and dancing and Rabbit saw a way of bringing about Opossum's downfall.

When Rabbit arrived with the news of the meeting, Opossum was sitting by the door of his lodge engaged in his favourite occupation - grooming his tail. 'I come to call you to the great council tomorrow, brother Opossum,' said Rabbit. 'Will you attend and join in the dance ?'

'Only if I am given a special seat,' replied the conceited Opossum, carefully smoothing some untidy hairs at the tip of his tail. 'After all,' he went on, grinning maliciously at Rabbit, 'I have such a beautiful long tail that I ought to sit where everyone can see and admire it.'

Rabbit was almost beside himself with fury, but he pretended not to notice the jibe and said, 'But of course, brother Opossum! I will personally see to it that you have the best seat in the council lodge, and I will also send someone to dress your tail specially for the dance.'

Opossum was delighted by this suggestion and Rabbit left him singing the praises of his tail even more loudly than usual.

Next, Rabbit called on the cricket, whom Indians call the barber, because of his fame as an expert hair-cutter. Cricket listened with growing amazement as Rabbit recounted his conversation with Opossum. Like all the other animals, he found Opossum's vanity and arrogance very tiresome.

He began to protest, but Rabbit held up a paw and said, 'Wait a moment. I have a plan and I need your help. Listen...', and he dropped his voice as he told Cricket what he wanted him to do.

Early next morning Cricket presented himself at Opossum's door and said that he had been sent by Rabbit to prepare the famous tail for the council that evening. Opossum made himself comfortable on the floor and stretched out his tail. Cricket began to comb it gently.

'I will wrap this red cord round your tail as I comb it,' he explained, 'so that it will remain smooth and neat for the dance tonight.'

Opossum found Cricket's ministrations so soothing that he fell asleep, awakening just as Cricket was tying the final knot in the red cord which now completely swathed his tail.

'I will keep it bound up until the very last moment,' thought Opossum gleefully. 'How envious the others will be when I finally reveal it in all its beauty!'

That evening, his tail still tightly wrapped in the red cord, Opossum marched into the council lodge and was led to his special seat by a strangely obsequious Rabbit.

Soon it was time for the dancing to take place. The drums and rattles began to sound. Opossum stood up, loosened the cord from his tail and stepped proudly into the centre of the dance floor. He began to sing.

'Look at my beautiful tail!' he sang as he circled the floor. 'See how it sweeps the ground!'

There was a great shout from the audience and some of the animals began to applaud. 'How they admire me!' though Opossum and he continued dancing and singing loudly. 'See how my tail gleams in the firelight!'

Again everyone shouted and cheered. Opossum began to have just the merest suspicion that all was not quite as it should be. Was there possibly a hint of mockery in their voices ? He dismissed such an absurd idea and continued dancing.

'My tail is stronger than the eagle's, more lustrous than the raven's!'

At this the animals shrieked so loudly that Opossum stopped in his tracks and looked at them. To his astonishment and chagrin they were all convulsed with laughter, some leaning weakly on their neighbour's shoulders, others rolling on the ground in their mirth. Several were pointing at his tail.

Bewildered, Opossum looked down and saw to his horror that his tail, his beautiful, thick, glossy tail, was now balk and scaly like that of a lizard. Nothing remained of its former glory. While pretending to comb it, the wily Cricket had snipped off every single lair.

Opossum was so overcome with shame and confusion that he could not utter a sound. Instead he rolled over helplessly on his back, grimmacing with embarrasment, just as opossums still do today, when taken by surprise.