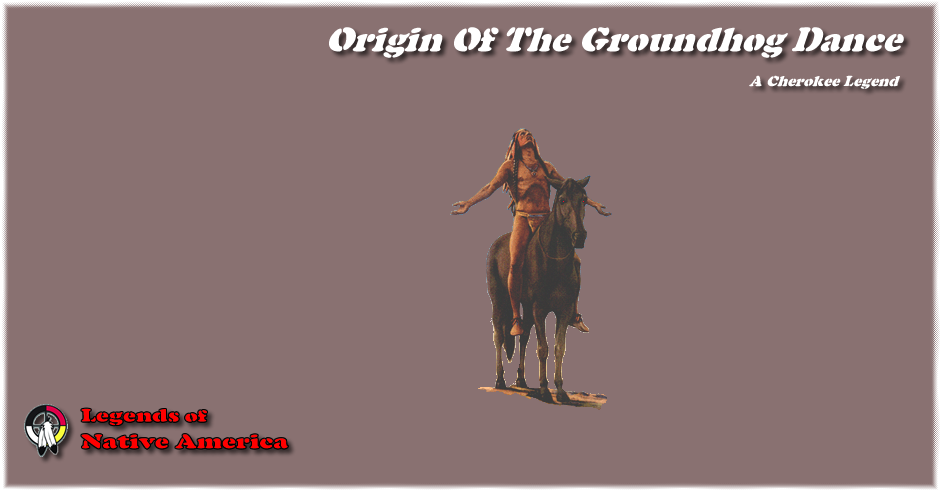 Seven wolves once caught a Groundhog and said, "Now we'll kill you and have something good to eat." But the Groundhog said, "When we find good food we must rejoice over it, as people do in the Green-corn dance.

I know you mean to kill me and I can't help myself, but if you want to dance I'll sing for you. This is a new dance entirely. I'll lean up against seven trees in turn and you will dance out and then turn and come back, as I give the signal, and at the last turn you may kill me."

The wolves were very hungry, but they wanted to learn the new dance, so they told him to go ahead. The Groundhog leaned up against a tree and began the song, Ha'wiy'ëhï', and all the wolves danced out in front, until he gave the signal, Yu! and began with Ha'wiy'ëhï', when they turned and danced back in line.

At the seventh song he said, "Now, this is the last dance, and when I say Yu! you will all turn and come after me, and the one who gets me may have me." So he began the seventh song and kept it up until the wolves were away out in front.

Then he gave the signal, Yu! and made a jump for his hole. The wolves turned and were after him, but he reached the hole first and dived in. Just as he got inside, the foremost wolf caught him by the tail and gave it such a pull that it broke off, and the Groundhog's tail has been short ever since.