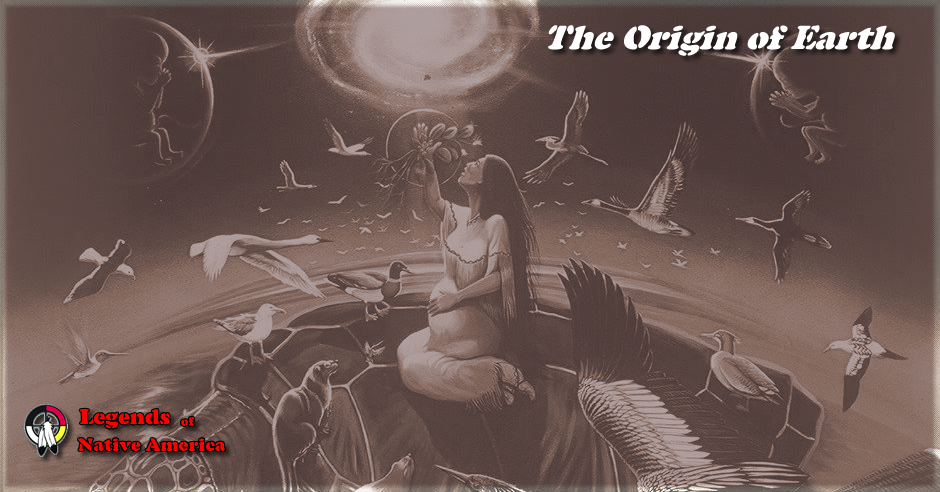 Before the beginning, water was everywhere. But no people, animals, or earth were visible. There were birds, however, who held a council to decide if it might be best to have all land or all water.

"Let us have land, so we can have more food," said some of the birds. Others said, "Let's have all water, because we like it this way."

Subsequently, they appointed Eagle as their Chief who was to decide one way or the other. Eagle decided upon land and asked, "Who will go and search for land?"

Dove volunteered first and flew away. In four days he completed his hunt and returned, reporting, "I could not find land anywhere."

Crawfish came swimming along and was asked by the council to help search for land. He disappeared under the water for four days. When he arose to the surface again, he held some dirt in his claws. He had found some land deep in the water.

Crawfish made a ball of the dirt and handed it to Chief Eagle, who then flew away with it. Four days later he returned and said to the council, "Now there is land, an island has been formed-- follow me!"

The whole bird colony flew after Eagle to see the new land, though it was a very small island. Gradually, the land began to grow larger and larger as the water became lower and lower. More islands appeared and these grew together, creating larger islands into one earth.

Tuskegee Indians say they were chosen by the Great Spirit to be the first people to live upon the new earth, a long, long time ago.