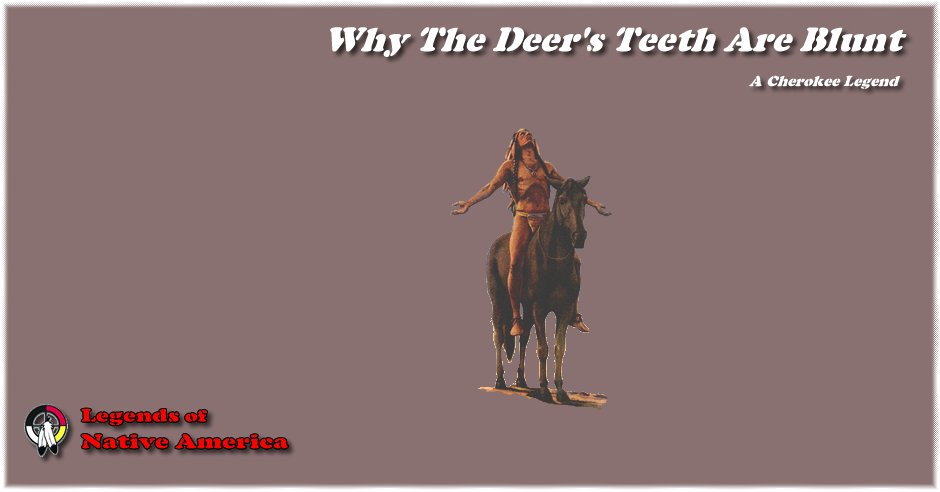 The Rabbit felt sore because the Deer had won the horns, and resolved to get even. One day soon after the race he stretched a large grapevine across the trail and gnawed it nearly in two in the middle. Then he went back a piece, took a good run, and jumped up at the vine. He kept on running and jumping up at the vine until the Deer came along and asked him what he was doing?

"Don't you see?" says the Rabbit. "I'm so strong that I can bite through that grapevine at one jump." The Deer could hardly believe this, and wanted to see it done. So the Rabbit ran back, made a tremendous spring, and bit through the vine where he had gnawed it before. The Deer, when he saw that, said, "Well, I can do it if you can." So the Rabbit stretched a larger grapevine across the trail, but without gnawing it in the middle.

Deer ran back as he had seen the Rabbit do, made a spring, and struck the grapevine right in the center, but it only flew back and threw him over on his head. He tried again and again, until he was all bruised and bleeding.

"Let me see your teeth," at last said the Rabbit. So the Deer showed him his teeth, which were long like a wolf's teeth, but not very sharp.

"No wonder you can't do it," says the Rabbit; "your teeth are too blunt to bite anything. Let me sharpen them for you like mine. My teeth are so sharp that I can cut through a stick just like a knife."

And he showed him a black locust twig, of which rabbits gnaw the young shoots, which he had shaved off as well as a knife could do it, in regular rabbit fashion.

The Deer thought that just the thing. So the Rabbit got a hard stone with rough edges and filed and filed away at the Deer's teeth until they were worn down almost to the gums. "It hurts," said the Deer; but the Rabbit said it always hurt a little when they began to get sharp; so the Deer kept quiet.

"Now try it," at last said the Rabbit. So the Deer tried again, but this time he could not bite at all.

"Now you've paid for your horns," said the Rabbit, as he jumped away through the bushes. Ever since then the Deer's teeth are so blunt that he can not chew anything but grass and leaves.