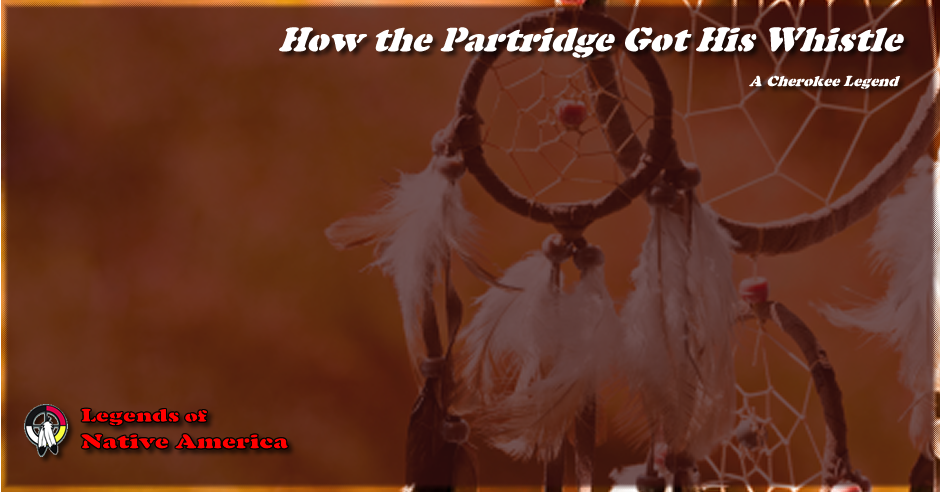 In the old days the Terrapin had a fine whistle, but the Partridge had none. The Terrapin was constantly going about whistling and showing his whistle to the other animals until the Partridge became jealous.

One day when they met the Partridge asked leave to try it.

The Terrapin was afraid to risk it at first, suspecting something but the Partridge said, "I'll give it back right away, and if you are afraid you can stay with me while I practice."

So the Terrapin let him have the whistle and the Partridge walked around blowing on it in fine fashion. "How does it sound with me?" asked the Partridge.

"O, you do very well," said the Terrapin, walking alongside.

"Now, how do you like it," said the Partridge, running ahead and whistling a little faster. "That's fine," answered the Terrapin, hurrying to keep up, "but don't run so fast."

"And now, how do you like this?," called the Partridge, and with that he spread his wings, gave one long whistle, and flew to the top of a tree, leaving the poor Terrapin to look after him from the ground.

The Terrapin never recovered his whistle, and from that, and the loss of his scalp, which the Turkey stole from him, he grew ashamed to be seen, and ever since he shuts himself up in his box when anyone comes near him.