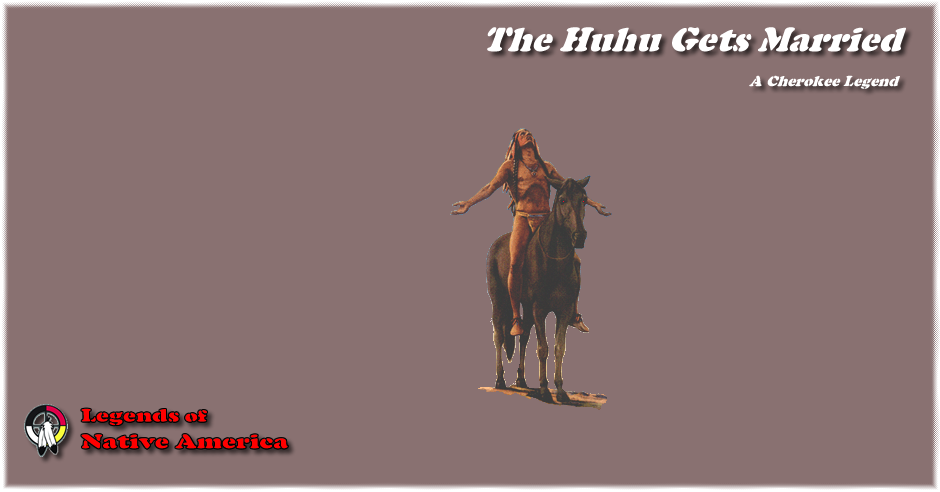 A widow who had an only daughter, but no son, found it very hard to make a living and was constantly urging upon the young woman that they ought to have a man in the family, who would be a good hunter and able to help in the field.

One evening a stranger lover came courting to the house, and when the girl told him that she could marry only one who was a good worker, he declared that he was exactly that sort of man; so the girl talked to her mother, and on her advice they were married.

The next morning the widow gave her new son-in-law a hoe and sent him out to the cornfield. When breakfast was ready she went to call him, following a sound as of some one hoeing on stony soil.

When she came to the spot she found only a small circle of hoed ground and no sign of her son-in-law.

Away over in the thicket she heard a huhu calling.

He did not come in for dinner, either, and when he returned home in the evening the old woman asked him where he had been all day. "Hard at work," said he. "But I didn't see you when I came to call you to breakfast." "I was down in the thicket cutting sticks to mark off the field," said he. "But why didn't you come in to dinner?" "I was too busy working," said he. So the old woman was satisfied, and they had their supper together. Early next morning he started off with his hoe over his shoulder. When breakfast was ready the old woman went again to call him, but found no sign of him, only the hoe lying there and no work done. And away over in the thicket a huhu was calling, "Sau-h! sau-h! sau-h! hu! hu! hu! hu! hu! hu! chi! chi! chi!--whew!"

She went back to the house, and when at last he came home in the evening she asked him again what he had been doing all day. "Working hard," said he. "But you were not there when I came after you." "O, I just went over in the thicket a while to see some of my kinsfolk," said he. Then the old woman said, "I have lived here a long time and there is nothing living in the swamp but huhus. My daughter wants a husband that can work and not a lazy huhu; so you may go." And she drove him from the house.