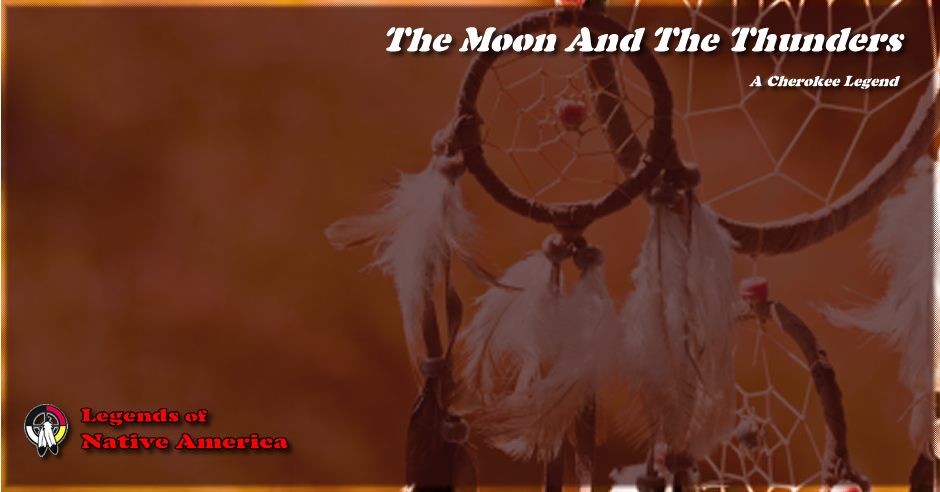 The Sun was a young woman and lived in the East, while her brother, the Moon. lived in the West. The girl had a lover who used to come every month in the dark of the moon to court her. He would come at night, and leave before daylight.

Although she talked with him she could not see his face in the dark, and he would not tell her his name, until she was wondering all the time who it could be.

At last she hit upon a plan to find out, so the next time he came, as they were sitting together in the dark of the âsi, she slyly dipped her hand into the cinders and ashes of the fireplace and rubbed it over his face, saying, "Your face is cold; you must have suffered from the wind," and pretending to be very sorry for him, but he did not know that she had ashes on her hand.

After a while he left her and went away again.

The next night when the Moon came up in the sky his face was covered with spots, and then his sister knew he was the one who had been coming to see her. He was so much ashamed to have her know it that he kept as far away as he could at the other end of the sky all the night.

Ever since he tries to keep a long way behind the Sun, and when he does sometimes have to come near her in the west he makes himself as thin as a ribbon so that he can hardly be seen.

Some old people say that the moon is a ball which was thrown up against the sky in a game a long time ago.

They say that two towns were playing against each other, but one of them had the best runners and had almost won the game, when the leader of the other side picked up the ball with his hand--a thing that is not allowed in the game--and tried to throw it to the goal, but it struck against the solid sky vault and was fastened there, to remind players never to cheat.

When the moon looks small and pale it is because some one has handled the ball unfairly, and for this reason they formerly played only at the time of a full moon. When the sun or moon is eclipsed it is because a great frog up in the sky is trying to swallow it.

Everybody knows this, even the Creeks and the other tribes, and in the olden times, eighty or a hundred years ago, before the great medicine men were all dead, whenever they saw the sun grow dark the people would come together and fire guns and beat the drum, and in a little while this would frighten off the great frog and the sun would be all right again.

The common people call both Sun and Moon Nûñdä, one being "Nûñdä that dwells in the day" and the other "Nûñdä that dwells in the night," but the priests call the Sun Su'tälidihï', "Six-killer," and the Moon Ge'`yägu'ga, though nobody knows now what this word means, or why they use these names. Sometimes people ask the Moon not to let it rain or snow.

The great Thunder and his sons, the two Thunder boys, live far in the west above the sky vault. The lightning and the rainbow are their beautiful dress. The priests pray to the Thunder and call him the Red Man, because that is the brightest color of his dress. There are other Thunders that live lower down, in the cliffs and mountains, and under waterfalls, and travel on invisible bridges from one high peak to another where they have their town houses. The great Thunders above the sky are kind and helpful when we pray to them, but these others are always plotting mischief. One must not point at the rainbow, or one's finger will swell at the lower joint.