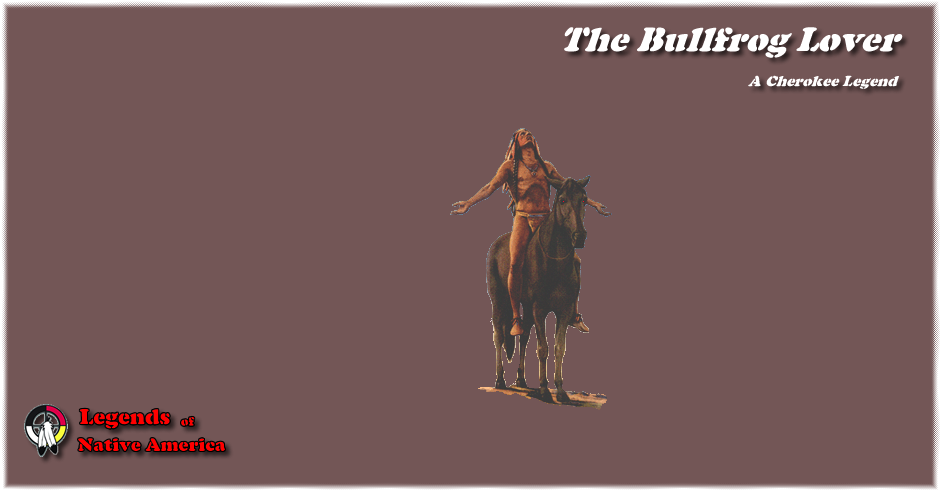 A young man courted a girl, who liked him well enough, but her mother was so much opposed to him that she would not let him come near the house. At last he made a trumpet from the handle of a gourd and hid himself after night near the spring until the old woman came down for water.

While she was dipping up the water he put the trumpet to his lips and grumbled out in a deep voice like a bullfrog's:

The woman thought it a witch bullfrog, and was so frightened that she dropped her dipper and ran back to the house to tell the people.

They all agreed that it was a warning to her to stop interfering with her daughter's affairs, so she gave her consent, and thus the young man won his wife.

She wondered much until one day when she came down she saw sitting on a stone by the spring a bullfrog, which suddenly took the form of a young man and asked her to marry him. She consented and took him back with her to the house. But although he had the shape of a man there was a queer bullfrog look about his face, so that the girl's family hated him and at last persuaded her to send him away.

As some tell it, the lover was a tadpole, who took on human shape, retaining only his tadpole mouth. To conceal it he constantly refused to eat with the family, but stood with his back to the fire and his face screwed up, pretending that he had a toothache.

At last his wife grew suspicious and turning him suddenly around to the firelight, exposed the tadpole mouth, at which they all ridiculed him so much that he left the house forever.