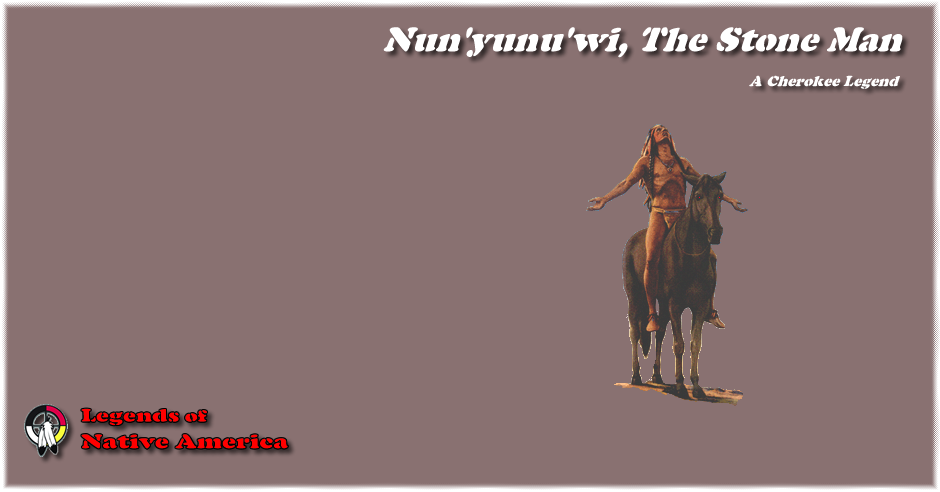 Once when all the people of the settlement were out in the mountains on a great hunt one man who had gone on ahead climbed to the top of a high ridge and found a large river on the other side.

While he was looking across he saw an old man walking about on the opposite ridge, with a cane that seemed to be made of some bright, shining rock. The hunter watched and saw that every little while the old man would point his cane in a certain direction, then draw it back and smell the end of it. At last he pointed it in the direction of the hunting camp on the other side of the mountain, and this time when he drew back the staff he sniffed it several times as if it smelled very good, and then started along the ridge straight for the camp.

He moved very slowly, with the help of the cane, until he reached the end of the ridge, when he threw the cane out into the air and it became a bridge of shining rock stretching across the river. After he had crossed over upon the bridge it became a cane again, and the old man picked it up and started over the mountain toward the camp.

The hunter was frightened, and felt sure that it meant mischief, so he hurried on down the mountain and took the shortest trail back to the camp to get there before the old man. When he got there and told his story the medicine-man said the old man was a wicked cannibal monster called Nun'yunu'wi, "Dressed in Stone," who lived in that part of the country, and was always going about the mountains looking for some hunter to kill and eat. It was very hard to escape from him, because his stick guided him like a dog, and it was nearly as hard to kill him, because his whole body was covered with a skin of solid rock.

If he came he would kill and eat them all, and there was only one way to save themselves. He could not bear to look upon a menstrual woman, and if they could find seven menstrual women to stand in the path as he came along the sight would kill him. So they asked among all the women, and found seven who were sick in that way, and with one of them it had just begun. By the order of the medicine-man they stripped themselves and stood along the path where the old man would come. Soon they heard Nun'yunu'wi coming through the woods, feeling his way with his stone cane.

He hurried on and met the third and the fourth and the fifth woman, but with each one that he saw his step grew weaker until when he came to the last one, with whom the sickness had just begun, the blood poured from his mouth and he fell down on the trail.

Then the medicine-man drove seven sourwood stakes through his body and pinned him to the ground, and when night came they piled great logs over him and set fire to them, and all the people gathered around to see. Nun'yunu'wi was a great ada'wehï and knew many secrets, and now as the fire came close to him he began to talk, and told them the medicine for all kinds of sickness.

At midnight he began to sing, and sang the hunting songs for calling up the bear and the deer and all the animals of the woods and mountains. As the blaze grew hotter his voice sank low and lower, until at last when daylight came, the logs were a heap of white ashes and the voice was still.

Then the medicine-man told them to rake off the ashes, and where the body had lain they found only a large lump of red wâ'dï paint and a magic u'lûñsû'ti stone. He kept the stone for himself, and calling the people around him he painted them, on face and breast, with the red wâ'dï, and whatever each person prayed for while the painting was being done-whether for hunting success, for working skill, or for a long life-that gift was his.