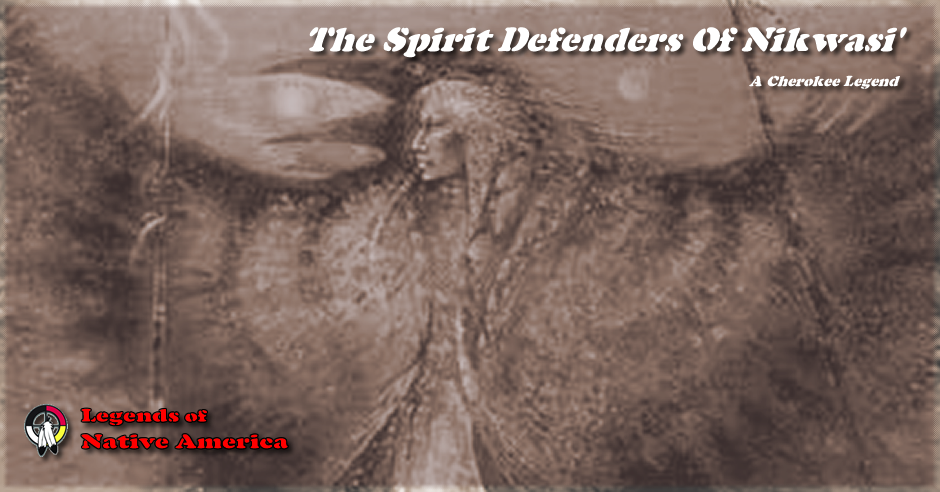 Long ago a powerful unknown tribe invaded the country from the southeast, killing people and destroying settlements wherever they went. No leader could stand against them, and in a little while they had wasted all the lower settlements and advanced into the mountains.

No leader could stand against them, and in a little while they had wasted all the lower settlements and advanced into the mountains.

The warriors of the old town of Nikwasi', on the head of Little Tennessee, gathered their wives and children into the townhouse and kept scouts constantly on the lookout for the presence of danger. One morning just before daybreak the spies saw the enemy approaching and at once gave the alarm.

The Nikwasi' men seized their arms and rushed out to meet the attack, but after a long, hard fight they found themselves overpowered and began to retreat, when suddenly a stranger stood among them and shouted to the chief to call off his men and he himself would drive back the enemy. From the dress and language of the stranger the Nikwasi' people thought him a chief who had come with reinforcements from the Overhill settlements in Tennessee.

They fell back along the trail, and as they came near the townhouse they saw a great company of warriors coming out from the side of the mound as through an open doorway. Then they knew that their friends were the Nûñnë'hï, the Immortals, although no one had ever heard before that they lived under Nikwasi' mound.

The Nûñnë'hï poured out by hundreds, armed and painted for the fight, and the most curious thing about it all was that they became invisible as soon as they were fairly outside of the settlement, so that although the enemy saw the glancing arrow or the rushing tomahawk, and felt the stroke, he could not see who sent it.

Before such invisible foes the invaders soon had to retreat, going first south along the ridge to where joins the main ridge which separates the French Broad from the Tuckasegee, and then turning with it to the northeast. As they retreated they tried to shield themselves behind rocks and trees, but the Nûñnë'hï arrows went around the rocks and killed them from the other side, and they could find no hiding place.

All along the ridge they fell, until when they reached the head of Tuckasegee not more than half a dozen were left alive, and in despair they sat down and cried out for mercy. Ever since then the Cherokee have called the place Dayûlsûñ'yï, "Where they cried." Then the Nûñnë'hï chief told them they had deserved their punishment for attacking a peaceful tribe, and he spared their lives and told them to go home and take the news to their people. This was the Indian custom, always to spare a few to carry back the news of defeat. They went home toward the north and the Nûñnë'hï went back to the mound. And they are still there, because, in the last war, when a strong party of Federal troops came to surprise a handful of Confederates posted there they saw so many soldiers guarding the town that they were afraid and went away without making an attack.