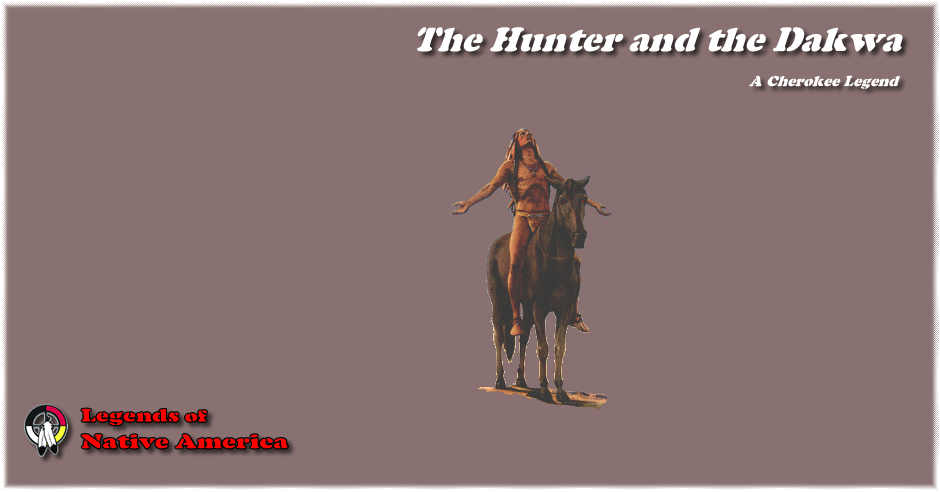 In the old days there was a great fish called the Dakwa which lived in the Tennessee River near the mouth of Toco Creek. This fish was so large that it could easily swallow a man.

One day several hunters were traveling in a canoe along the Tennessee when the Dakwa suddenly rose up under the canoe and threw them all into the air. As the men came down, the fish swallowed one with a single snap of its jaws, and dived with him to the bottom of the river.

This man was one of the bravest hunters in the tribe, and as soon as he discovered where he was he began thinking of some way to overcome the Dakwa and escape from its stomach.

Except for a few scratches and bruises, the hunter had not been hurt, but it was so hot and airless inside the big fish that he feared he would soon smother.

As he groped around in the darkness, his hands found some mussel shells which the Dakwa had swallowed. These shells had very sharp edges. Using one of them as a knife, the hunter began cutting away at the fish's stomach.

Soon the Dakwa grew uneasy at the scraping inside his stomach and came up to the surface of the river for air. The man kept on cutting with the shell until the fish was in such pain that it swam wildly back and forth across the river, thrashing the water into foam with its tail.

At last the hunter cut through the Dakwa's side. Water flowed in, almost drowning the man, but the big fish was so weary by this time that it came to a stop. The hunter looked out of the hole and saw that the Dakwa was now resting in shallow water near the riverbank.

Reaching up, the man pulled himself through the hole in the fish, moving very carefully so as not to disturb the Dakwa. He then waded ashore and returned to his village, where his friends were mourning his death because they were sure he had been eaten by the great fish.

Now they named him a hero and held a celebration in his honor. Although the brave hunter escaped with his life, the juices in the stomach of the Dakwa had scalded all the hair from his head, and he was bald forever after.